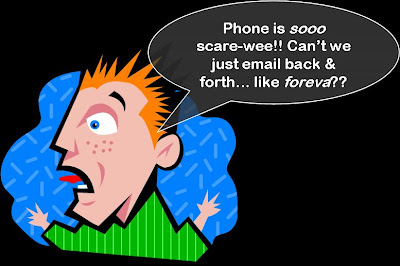 So…I’m sure most of you have seen my Top Ten Red Flags List for both chicks & guys. Well, I’ve decided to expand that list, since new douchiness happens to pop up when I least expect it.
In the past week or two, I had been exchanging emails with one fellow when I suggested to him that it would be easier to speak over the phone. Usually I don’t have to do this, bc after a few days, most prospects usually send me their info anyway and we move on to telephonic convos.

So I make the suggestion and Phone-O-Phobe emails me back with this response:

“…You should email me to my personal address. at least i can answer you from my phone then….and we can talk on the phone also. that would be great”

Huh? Is he scared of the phone or something…what the?

I email him my regular addy and a few hours later, get this response:

“Great. Do you think you can send me some photos? I wasn’t able to view them on your profile. I think it’s my computer that’s the problem.”

No dollface. Me thinks you’re the problem.

Maybe P.O.P. has had negative experience(s) with fake/bad pics & such, but that’s not my prob! And this guy’s clearly confusing online-dating with meeting chicks off of MySpace. It is NOT the same thing. Thanks, but Nah.

And P.S. – pics with chicks in your profile (friends or otherwise) are NOT favored. Nor are pics sooo close-up, I can see your brain through your nostrils.

Thanks again sweets. So Weak.

TOP 10: Online Dating Profile Red Flags – to be aware of!