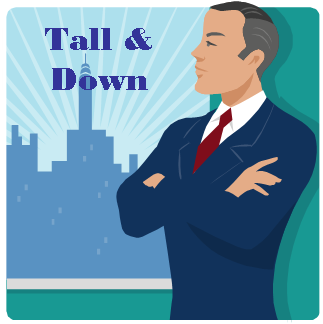 Ok. Tall & Down lives in L.I., has brown hair/blue eyes, tall-as-hell (6’4) and is a professional in the Med Insurance industry.

When we were first matched up, I was initially going to skip past his profile bc he chose the lengthy question & answer process, of which I do not care for AT ALL.

In fact, it says this in my profile. But it’s been my experience that guys don’t really ‘read’ profiles, they mostly just look at the pics!

What made me reconsider his profile was the fact that he had a golden retriever (I know) and I figured, ‘hey, anyone who has a golden must be a good person right?’

Anywho, TD & I had spoken all last week. Every convo lasting for over an hour and in all honesty – the convos were awesome!

When the subject matter turned to our families, TD said that his dad had cancer and was currently undergoing treatment for it. I told him that I knew what it felt like when a parent gets ill, since my mom had suffered a stroke last yr…so I felt for him. I mean stuff like that is so freaking hard to go through, right?

It also made me wonder how he was able to date, through all the fam drama.

We decided to meet up over the weekend, since he was going to be here anyways for a work function. I was definitely excited about meeting TD…

HE: “How does 7 pm work for you?”
ME: “Perfect, where exactly?”
HE: “I have a function at the Waldorf, so let’s meet after I am done, say at Whiskey Blue?” (@ the W hotel, across the street)
ME: “That sounds great. I haven’t been there in a while!”
HE: “Ok, so I will call you later then?”
ME: “Actually I will be running around so just text me when you get there. Btw – you remember what I look like right?”
HE: “Yup. And I’ll be the tall guy.”

Great. So now we have set plans and I am thinking about what to wear bc its effing pouring outside and it’s kinda warm – a strange combo for NYC in mid-Nov.

In the midst of figuring out my outy, I thought ‘Wait. I DO know what he looks like, right?’

I mean he only had one pic on his pro, but it was pretty close up so I think I know who to look for…and if I had any doubt, the height thing should be a confirmation. I hope.

So I get dressed, feed Midtown Pups and then head out to catch a cab. Of course there are NO cabs bc its raining and its Sat eve, so I ring up TD…

ME: “Hey, I’m so sorry I’m running late bc there are no cabs!”
HE: “No prob, take your time it’s fine. I totally understand.”
ME: “Ok, Ill be there as soon as possible.”
HE: “Take your time. I’m just having a drink at the bar. In fact I’m on my second drink already!”

I finally get to 49th & Lex and head into the bar. As soon as I walk in, 2 guys start smiling at me as if they know me and it totally reminds me why I do not go to bars to meet random guys…

Something tells me to walk to the end of the bar, and as I do, I see someone who resembles TD. He smiles back at me and it turns out, it was TD.

The bar was crowded & the lighting was dim but when I looked at TD closely, I realized –

He was about 10 yrs older-looking than in his profile pic.

He was supposed to be a handsome guy in his mid-thirties, but in fact, TD looked more like a younger Michael Douglas. Not cool folks. I mean he wasn’t necessarily unattractive, he just looked MUCH older in person. And clearly his profile pic was one that was taken years ago. That is effed up X 100.

I was totally not attracted to him at all.

Of course, I didn’t mention that his pic was clearly outdated bc, well, what was the point? It’s not like I was going to see him again after this BS and I really didn’t feel like having him give me some random explanation. I didn’t care.

As TD orders me a drink, he tells me:

Uhm, WTF. Why is he telling me this? Did he want me to start wrestling her or something…? I don’t care dude!

We move to a table and start convo. I ask him how is dad is doing and the whole time he is talking to me, he is giving NO eye-contact and in fact staring straight ahead. Not sure what that was about and it annoyed the hell outta me. But of course, I say nothing. Plus he had these freaky huge black bags under his eyes, as if he hadn’t slept in a week and the deepest eye wrinkles I have EVER seen. It was so distracting. Not to mention scary as hell.

Throughout the convo, I was thinking of how to end the date. But as he continued to talk about his dad and the cancer treatments, I started to feel bad for him bc this was a hard thing to go through.

At some point the ‘date’ had morphed into some type of therapy session for him. I guess meeting me helped to take his mind off of his fam drama.

Sorry, but that is really not fair. That should be what friends & family are for, not people you are going out with for the 1st time.

HE: “We were together for 3 yrs and broke up bc she was very career driven and moved out to pursue her career.”
ME: “How come you guys didn’t try to work things out.”
HE: “We did, but I need to be with someone who isn’t running after her career.”

Note: Girls who move out after being in a relationship for that long, don’t just do so for their careers ONLY. Clearly there was something else that was a prob.
ME: “So you don’t want someone who has a career?”
HE: “No I do, just not someone who is obsessed with it.”

As I take the last sip of my drink TD asks:

He says he feels like sushi so I suggest heading over to a place near my area so that I can easily walk home.

Let me just clarify the situation – he was making me feel like he needed to hang out with someone bc he was dealing with a lot of pain. This has never happened to me before and I wasn’t sure how to handle it…

HE: “So how are you able to date while going through everything with your dad?”
ME: “I need to go out to take my mind off of it. So dating helps me do that.”

I see. *Ahem* are you guys following this?

We get to the resty and it is packed. We end up getting seated at the bar and ordered up some sushi. I really didn’t eat much bc I wasn’t very hungry but as he chows down he starts a convo with the guy next to us regarding some sports event that was on TV. Whatevz.

We (he) finish dinner and at this point I should have just said goodnight and walked home (which was around the corner, thank god!). Instead, he asks if I want to go somewhere else to get a drink before ending the night.

I say ok (why?) and we walk to a pub around the corner. I guess bc I was in my area I felt like ‘what’s the big deal?’ at this point.
Yea, I don’t really understand my logic either, but I kinda didn’t understand this whole evening in general.
So now we are at the pub and surprisingly, having some great convo! We even head over to the music player to pick some songs out and it turns out, we have similar tastes in music. Maybe this night wasn’t going to be a waste after all??? After about an hour, we decide to call it a night. I actually felt good about not ending the night earlier bc we had a really nice time at the pub…
Then, as I open the door to walk out, I end up bumping into some random guy who was leaning against the door. I didn’t even see him there, but clearly I had upset him.
Random guy starts yelling at me (you know the type: lone pub drinker, uber-drunk & an angry person in general), so I start yelling back! I turn to see where TD is and he is effing half way down the block just watching the whole scenario! Jerkface didn’t even have my back – WTF!
What kind of guy does that?
And after listening to his drama/problems all night, I was uber-pissed that he couldn’t even say something to this angry, crazy drunk guy. So as I walk away from crazy drunk guy I tell TD that he is fucked up for just walking away & watching. At this point, both TD and I walk opposite ways – me east to my apt and him west to catch a cab.

p.s. – The Perricone MD Giveaway winner will be announced tomorrow – THANK YOU to everyone who entered/promoted & Tweeted – you guys rock! XOXO

32 thoughts on “Character Breakdown: Tall & Down”