Last week I was bombarded with texts from EX-EX, whom, through a plethora of colorful verbiage requests, was relentless in his quest for me to accompany him to his youngest sister’s wedding. Of course, I would not even entertain the idea, but I do kind of understand why he had wanted me to go.
With him currently being single, this would be the first major family event (besides funerals/wakes) that XX would be going to solo, since our break up over three years ago. Cannot believe it’s been that long already – yikes! I didn’t feel bad for him or anything, but what I couldn’t believe was that – I had first met his lil sis back when she was a senior in her HS. And now she’s getting MARRIED? Whoa.

Where did time go? How did the years go by sooo fast – DAMN! In all honesty, I really had no interest in hearing any of the details about her wedding either…I just did not want to know. Plus, why is it my business anyway, hello!

In any case, XX kept texting me with all the details in hopes I would change my mind and come as his guest…whatevz!!

Details include, but not limited to 😉 :

Did I really need to know this?? Did he really think bc of the above said details I was going to change my mind about accompanying him?

Truthfully though, I was curious to know what her dress looked like (doesn’t every girl?), but I kept my curiosity to myself…

The morning of the wedding XX attempted one last time to invite me (insane!) thereby incessantly reminding me that this day was her big day. Don’t get me wrong, I wasn’t unhappy for her, I just did NOT want to know ANYTHING about it. Not because I am single, but bc the chick getting married is part of my EX’s fam – this is not info I particularly find exciting…am I alone on this?

Anywho, later that day XX sent me a pic of his sis in her wedding gown. Would love to post the real pic, but that would not be cool. If I were to reference SATC, the bride would most likely resemble Charlotte in this pic: 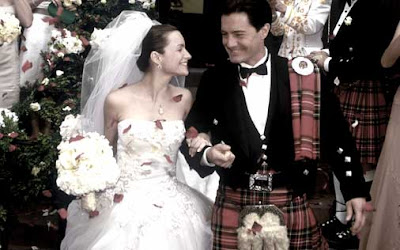 Secretly, I was hoping she would look more like this: 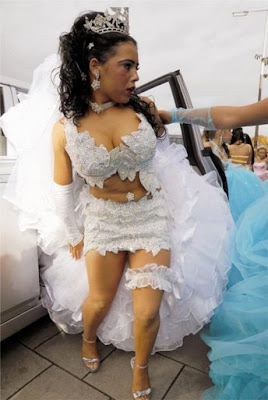 I kid! (maybe, lol) But it made me wonder how some people get married soo young and others, much later in life. Sounds like a jejune thought, but remember that line from SATC where Charlotte says “I’ve been dating since I was 15! Where is he??”. LOL – one of my favs!

No seriously, where is he? 😉

p.s. – I dedicate this post to ParkAvenuePrincess, the bloggy world’s Charlotte York Goldenblatt 😉 …
p.s.s. Did you know that Kristin Davis is actually a recovering alcoholic – Cah-ray-zee!