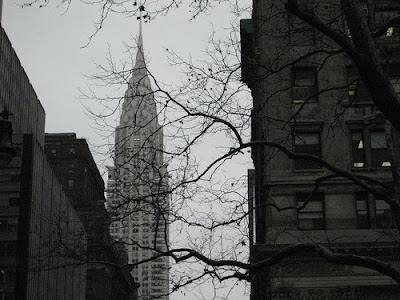 source
Wow.
Ok…when I read this article on nypost.com early this morning, I could not BELIEVE the things peeps would sacrifice in order to live in Manhattan. It’s unreal.

And I have to tell you dahlings, that even though I am still a renter, I must come home to a place that makes me feel comfortable & relaxed. AND, it must be aesthetically pleasing to me.

Otherwise – coming back to my apt would be absolutely effing miserable.

Last year I spent a lot of energy re-decorating my apartment to suit my taste and it has made my life so much more positive & bright. It has turned my apt into an environment that is conducive to developing new project ideas, completing current work projects & overall a great place to live.

Of course, if I had an absurd amount of dispensable income, I would love to live in a penthouse in a lux high-rise (one day dammit!) . But for now, my apt suits me just fine and is actually one of my fav places to be – in Midtown of course!

There are however, a few things I cannot sacrifice:

The folks in this article seem to be just fine without these things and even less….

They do their dishes in the shower, sit sideways on the toilet and need to watch their weight just to fit into their bathrooms.

But these cramped New Yorkers wouldn’t have it any other way.

A week after The Post told the story of Zaarath and Christopher Prokop and their 175-square-foot micro-studio on Sunday, other New Yorkers lined up to share their tales of living small, including a 55-square-foot apartment in Hell’s Kitchen and a 90-square-foot home on the Upper West Side.

“To me, it’s all about location,” said Eddie Rabon, 24, who lives in a microscopic Hell’s Kitchen abode. “I’m in an amazing neighborhood, and the money I save on rent alone lets me really enjoy New York for what it is. My apartment is a place to hang my hat and catch a few hours of sleep. That’s it.” 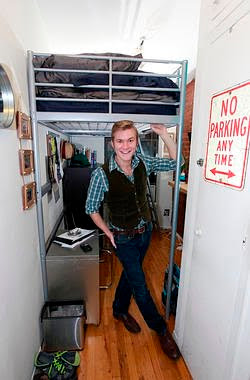 When freelance event planner Eddie Rabon talks about his itty-bitty pad — just one square foot larger than a Rikers Island jail cell — the excitement is clear in his voice.

“It’s fantastic,” he said. “It’s a great neighborhood in the greatest city. It’s about $800 a month. You won’t find that price anywhere else in this area. I feel like the money I save not having to get on the train to get around because I’m in the center of everything is worth it.”

Rabon said the longest wall in his apartment is 121/2 feet, and that includes the apartment door. At its narrowest spot, he can spread his arms and almost touch both opposing walls. He said he has trouble turning around in his little shower, and said taller friends have been unable to close the bathroom door if they need to sit.

“The bathroom has an airplane sink turned lengthwise,” he said. “So I can’t actually fit in over the sink. 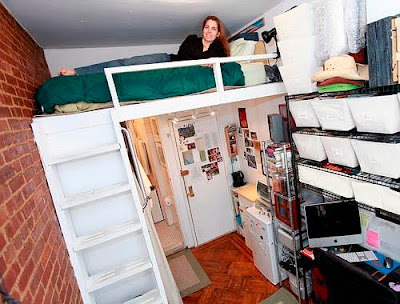 The first night Felice Cohen, 39, slept in her tiny apartment — with a full-size loft bed only 23 inches from the ceiling — she had a “panic attack.”

Her tiny bathroom is a challenge, though: “I had to learn to sit sideways on the toilet so I don’t bang my leg on the tub.” 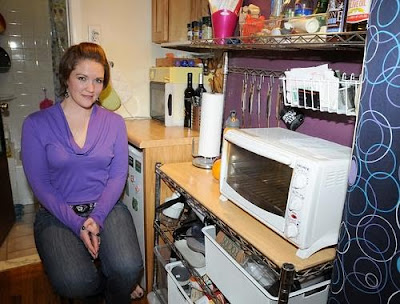 Genevieve Shuler, 31, always knew she wanted to live near Washington Square Park, the neighborhood her parents once called home. “When I first walked in, I thought, ‘This is really incredibly tiny,’” she said of the $780-a-month pad. “There were no closets, no real kitchen. But I knew I could do more with it . Once I knew my loft bed could fit, I took it.” When it comes time to do the dishes, because the kitchen sink is so small, “I do them in the shower.”

Q: Would you dahlings sacrifice comfort for location?

p.s. – The winner of MG’s Daffy’s Giveaway is – Very Married! Congrats darling, send me your email!! AND

p.p.s – I have a new giveaway that I will be posting about later today – so please look out for it! AND

p.p.p.s – Since Wed is SIMC, I will be sure to write up my date from this weekend, on this Thursday’s post…just so you know my sched, dolls – LOL! XOXO

Apartment City: Another One Bites The Dust

Solo Living in the City…

27 Comments on “Apartment City: How Small is Too Small?”