I saw the word “Kitchenista” on a recent  NYPost.com headline and had to further investigate (seriously, anything with an “ista” at the end of it will get my attention).

I assumed I was going to get the latest info on city girls who have impeccable tiny apt. kitchen cooking skills using appliances designed by Lilly Pulitzer or Vera Bradley.

According to NYPost, Kitchenista’s are ‘New Yorkers who store their clothes in ovens and fridges’.

I must admit, back in my 16 hr i-banking days,  I hardly spent time in my apt, let alone step foot into my tiny kitchen. I think my fridge had orange juice, milk, some type of protein shake mix (remember I still lived w. my ex at the time), ice and…takeout leftovers (thanks to dinner being charged to an expense acct).

Of the few meals I would eat in my apt, one was Sunday breakfast, but we  usually ordered these in bc I sooo exhausted from working all week. And since we ate breakfast so late, we would end up having an early dinner at a resty in the neighborhood (Sun eves are perfect for casual-chic dining in the city).

Anywho, after switching careers, my lifestyle changed and so did my kitchen skills! I took satisfaction in making small, but gourmet meals for  my bf & I and had even bought cookware of the same color (light pink…oooh yea).

So now, I only cook occasionally for myself or when gf’s are over (come ovah dolls!). But I will say…for Christmas last year, my parents gave me my first coffee maker and now –  my tiny NYC apt kitchen feels fit for urban survival.

The Kitchen is My Closet: Meet the Kitchenistas — New Yorkers who store their clothes in ovens and fridge by Alexis Swerdloff for NYPost.com

After a hard night on her feet as the manager of a busy downtown restaurant, Bari Musacchio heads to her NoLIta studio apartment, hangs up her coat, takes off her shoes — and puts them in her refrigerator.

“I have one closet, and things were overflowing, so I started putting shoes in the fridge,” says the fashionable 26-year-old, whose wardrobe is heavy on the black and consists mostly of skinny jeans and blazers. 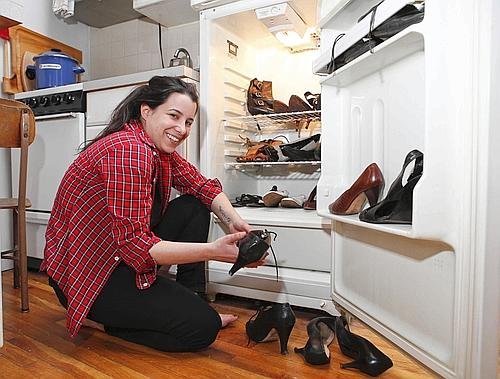 “And then I moved on to my cabinets, where I now store my seasonal clothes — sweaters in the summer, T-shirts in the winter.”

Musacchio is not alone. Once a New York urban legend — like crocodiles in the sewers or the rent-controlled apartment with a view — people who store sweaters in their ovens do actually exist.

In a town where square footage is at a premium, closet space is coveted.

Takeout culture has made cooking at home practically obsolete for some people, which means that more New Yorkers are discovering that their kitchens are teeming with underused nooks and crannies — namely refrigerators, ovens and cabinets — ideal for storing their cashmere sweaters and knee-high boots.

“Oh my gosh, who doesn’t use their kitchen as a closet in New York?” quips design writer Jen Salgado, 37, who used to store vintage leather handbags and canvas totes in her fridge (yup, it was plugged in) prior to renting her “country home” — a 4-by-4-by-4-foot space in Manhattan Mini Storage down the street from her 300-square-foot, one-bedroom apartment in the West Village.

Mike Nouveau, 26, a downtown deejay with a shoe fetish, never eats at home.

“My kitchen is really just a wall of my 225-square-foot apartment,” he says. So he unplugged his refrigerator and in went his shoes. “I have three rows of shoes in there, and they fit perfectly.” 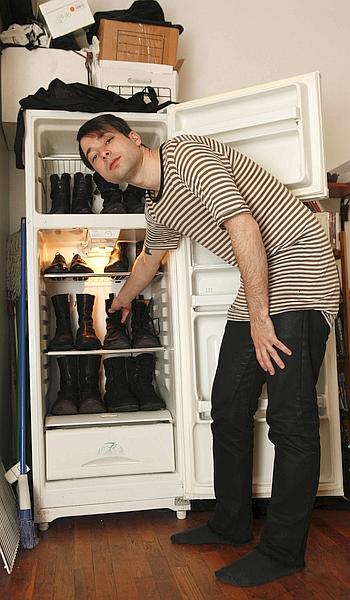 Zandile Blay, a 27-year-old fashion writer, decided to get rid of her refrigerator entirely.

“I replaced it with a huge full-length mirror and got a small beverage cooler for my wine and Coronas,” she says.

She did, however, keep her oven, where she stores her jeans and high-heel shoes.

“I called up my super and asked him to turn the gas off,” she says, “so I wouldn’t accidentally burn my clothes. And after asking me twice in Spanish, then once in broken English if I was sure, he went ahead and agreed to my request.” 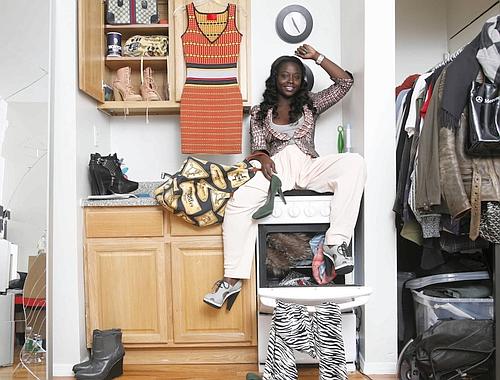 Blay contends that because ovens stay cool and dry, they’re “almost the ideal environment for keeping clothes. I just pop open the oven and my clothes are as fresh as can be.”

One day, Jim Caruso, a 52 year-old singer and Broadway producer, was bemoaning his lack of storage space when, he recalls, “It hit me like a ton of bricks — my oven! All that wasted space!”

So Caruso, who claims that the only things he cooks are “ice and popcorn,” turned his oven into a sweater closet.

“You know those trays that go in and out? You pull the tray out, take out your sweater and put the tray back in. It’s great. The oven is made for clothing — except it’s not!”

Musacchio also thinks there’s something fun, and even a little bit glamorous, about her refrigerator/closet. “You open up the fridge, you see all your shoes laid out in this display case,” she says.

But a girl has to eat, right? “Well, I work in the restaurant industry, so I eat every meal out,” says Musacchio.

“My kitchen is so small, it just doesn’t make sense for me to cook in it.”

Blay, who uses her kitchen cabinets to store accessories, shoes and look books, says that the only kitchen-specific items she keeps in her apartment are four wineglasses.

“It was between food and my clothing, and clothing won,” Blay says.

She says she has “an active dating life — so you know, there’s a dinner every night.”

Then, of course, there are the strange reactions from friends. “I don’t think it’s weird,” says Musacchio. “But one time a friend stopped by and asked if she could have a glass of water. She opened up the refrigerator, and was like, ‘What the hell is that?’ ”

Nouveau says that people open up his refrigerator and start laughing. “They think it’s really funny.”

Caruso just hopes for no surprise parties. “I pray nobody does me a favor and bakes me a surprise cake. I don’t need to know what broiled cashmere smells like.”

Apartment City: How Small is Too Small?

MG Decor: Display Your Shoes In A Buffet Hutch

MG Decor: How To Create A Corner Home Office