I usually listen to the morning news on TV while I check my emails/tweets/etc. So when I heard the anchor say “do you follow the 40% rule?”, I just knew it had something to do with dating…

I was totes right.

Women ‘should bare 40% of their bodies to attract men’

Women should wear clothes that bare 40% of their flesh to maximise their chances of attracting men, new scientific research indicates.
source
Striking the right balance between revealing too much and being too conservative in how much skin is on show has long been a dilemma for women when choosing the right outfit for a night out.  However, a study by experts at the University of Leeds has come to the rescue by calculating the exact proportion of the body that should be exposed for optimum allure.
The findings were based on work by four female researchers, who discreetly observed women at one of the city’s biggest nightclubs from a balcony above the dance floor. Using tape recorders hidden in their handbags, the researchers took note of what female clubbers were wearing and how many times they were approached by men asking them to dance. (wtf -tape recorders? I should try this w. my flip…)
For the purposes of the study, each arm accounted for 10% of the body, each leg for 15% and the torso for 50%. Women who revealed around 40% of their skin attracted twice as many men as those who covered up. However, those who exposed any more than this also fared worse. Experts believe that showing too much flesh puts men off because it suggests they might be unfaithful. (or that they maybe hoes/hookers/hookerettes)
Psychologist Dr Colin Hendrie, who led the study, told the Daily Mail: “Any more than 40% and the signal changes from ‘allure’ to one indicating general availability and future infidelity. (skankity-skank)
“Show some leg, show some arm, but not any more than that.”
The study, published in the journal Behaviour, found that the most popular women combined the 40 per cent rule with tight clothing and provocative dancing. The 15% that combined all three criteria were approached by 40 men each.

According to the news segment, it should look similar to how Eva Longoria does wearing this dress: 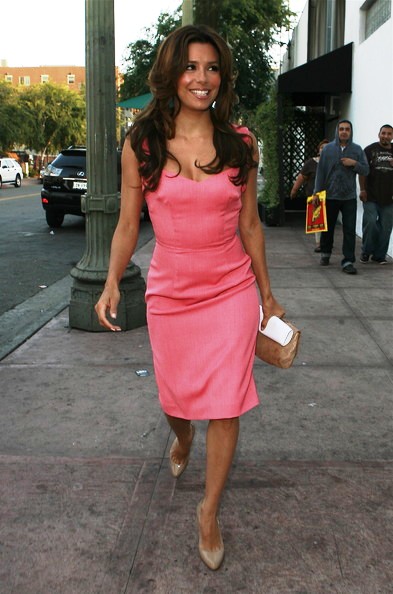 Anywho, I agree with this “rule” and I think most of my Date Night Outfits reflect this…

From msn.com: “Dating Down”

On the 1st Date: “8 First Date Tips for Single Women”