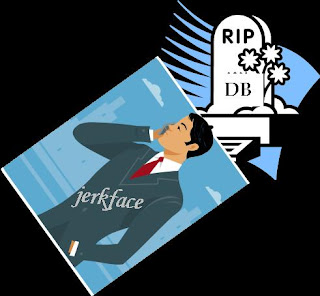 Soo, remember those ‘tentative plans’ for this weekend? Well…neva happened!

Mind you, after he didn’t get back to me the Friday after the show, I pretty much left the DB thingy alone…until he texted me on Memorial Day about making plans for the week. What’s up with that? It all just seemed a little shady to me…

Anywayz, after pointless back & forth texts Tueday & Weds, we finally had a full text convo:

HE: ‘Hey. Hamptons was fun, My day was crazy. What r u up to the rest of the week. How was it today?’
ME: ‘this week Im wrking on a project that has a deadline for Friday eve so it’ll be crazy until then..are u going to be here this wknd or out of the city?’
HE: ‘I’ll be here. Let’s go out!’
ME: ‘cool. sat is one of my gf’s bday so shes celebrating w. friends at some bar. we can meet up there or after if ur up for it ;-)’
HE: ‘Ok, I’ll give u a call Friday and we can figure it out’
ME: ‘sounds good. hope ur wk isnt too crazy!’
HE: ‘Urs either’

Seeing as how DB was M.I.A. all Memorial Day wknd, I was def not confident he would come through. So I had a quick convo with a guy friend telling him the situation – first about the whirlwind date week, then on being MIA and now acting interested again…

Guy Friend: “I bet he has an EX in the picture.”
ME: “Really? Why would you say that?”
Guy Friend: “He didn’t contact you all Memorial Day wknd, which is typically a wknd you spend with fam/gf/wife, etc. He might even be married!”

Married?!?! Are you f*ing kidding me?

Guy Friend: “If he was in the “Hampton’s” all wknd, why couldn’t even text to say hello.” (btw, at the show, he told me he didn’t even want to go to the Hampton’s bc he didn’t enjoy the company of the friend he would be staying w. there. He said he would prefer to do something in the city w. me that wknd…shady douche)
ME: “I know.”
Guy Friend: “When are you supposed to see him?”
ME: “Saturday. I think, who knows now.”
Guy Friend: “When will you know?”
ME: “He said he’ll call me this afternoon (Friday) to confirm tomorrow.”
Guy Friend: “Well its 4pm already, so that’s not a good sign. I say call him around 6pm, which is enough time and tell him you can meet today after all. If I was interested in a girl, I would def see them or make room for them, even if I made plans. But if he has plans already booked, he prob scheduled someone around you. And its prob an EX. A guy doesn’t act the way he did and then just disappear. She could have been away for a week or something and he tried to fit you in as much as he could before she came back.”

Are you kidding me…really? WTF!

ME: “You know what’s so weird. The very first time we spoke on the phone, I kept hearing a noise in the background. I wasn’t sure what it was, but our convo was so great I didn’t pay any attention to it after sometime. Then after an hour of convo DB says ‘Someone keeps ringing my bell’. I ask him ‘Why don’t you answer it?’. He responds ‘Well I’m looking out the window and can’t see who it is.’ I say ‘You don’t want to find out who it is?’ He says ‘Nah.’

Ah-huh. Although I thought that was strange, it was our first convo, so why make a thing out of it right? But I will say this – it was 9:30pm on a Thursday and the only person who has ever rang my bell at that misc. day/time was my crazy EX-EX, who was trying to get back with me. And I was def. not going to answer the door…and I didn’t.

Guy Friend: “Yea, that doesn’t sound good to me. Call him about today. I guarantee he will be busy and trust me when a guy is straight up with a girl, he will make time for her and not act like this. Something’s up.”

Ugh. It was all so pointless & unnecessarily complicated to me, but just to confirm my thinking that his acting shady was not a fallacy, I texted DB, instead of calling –

ME: ‘Hey, I finished earlier than I thought today, so if you’re free to meet up later let me know.’

HE: ‘Hey, no I can’t swing tonight, but I’ll give you a ring tom afternoon about the eve.’

Sure you will DB!

So just as fast as DB had came into my life, was about as fast as he had left…done & done!